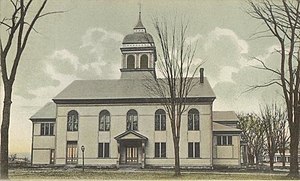 Walpole is a town in Cheshire County, NH. The town was first granted in 1736 by Colonial Governor Jonathan Belcher of Massachusetts as "Number 3", third in a line of Connecticut River fort towns. It was settled as early as 1736, and called "Great Falls" or "Lunenburg". Colonel Benjamin Bellows, for whom Bellows Falls, Vermont, is named, built a large fort here for defense against Native attack. After the border between Massachusetts and New Hampshire was fixed (with Number 3 on the New Hampshire side of the line), the town was regranted by Governor Benning Wentworth as "Bellowstown", after its founder. It was incorporated in 1756. The grant was renewed in 1761, when the town was renamed "Walpole", in honor of Sir Robert Walpole, 1st Earl of Orford, and first Prime Minister of Great Britain.

According to the United States Census Bureau, the town has a total area of 36.7 square miles (95 km), of which 35.2 square miles (91 km) is land and 1.5 square miles (3.9 km) is water, comprising 4.16% of the town. The town is drained by the Connecticut River, which forms the western border of the town and is also the state border with Vermont. The northern part of Walpole is drained by the Cold River, a tributary of the Connecticut. The highest point in town is the summit of Derry Hill, at 1,663 feet (507 m) above sea level.

Walpole is surrounded by Alstead, Charlestown, Langdon, Surry and Westmoreland in New Hampshire, and by Rockingham and Westminster in Vermont.